De Beers and Alrosa, the world’s two largest diamond producers, say the diamond market is stabilizing after several months of severe cutbacks in rough sales and are expecting reasonably strong demand during the U.S. holiday season and Chinese New Year.

Both companies cut sales more than 25% as inventories of rough and polished diamonds increased earlier in the year and prices of both softened. The banks also continued their tight credit policies for the industry.

At the Nov. 4-8 cycle, De Beers increased rough allocations by about $100 million to $390 million, but reduced prices by 5% or more. This was an extraordinary move, because De Beers rarely lowers prices by such an amount, especially on larger, better quality rough diamonds. The company usually “adjusts” prices - raising them on a few of the more than 5,000 rough categories and lowering them on others, or it simply disguises decreases by shifting better quality rough into lower categories.

De Beers never lowers prices across the board, as it did in this last cycle. But a 5% reduction is impossible to disguise. Some reports indicate that small, less expensive qualities were lowered much more. De Beers also increased its buy-back allowance from 10% to 20% for larger goods, which permits clients to sell goods back to De Beers, which it cannot absorb or cut profitably.

De Beers was likely forced into lowering prices after the September announcement by ABN Amro Bank that it would no longer provide credit for rough purchases that cannot be cut profitably, which included almost all categories of diamonds at that time.

Russia’s Alrosa announced that its third quarter rough sales fell 37% by value compared to the same period last year. The drop would have been larger if not for a recovery in October that saw an increase in revenues from the same month in 2018. One reason for the precipitous drop is that the company shifted its focus to smaller diamonds, thus sales by volume were down only 5%.

Alrosa said that October’s sales increase of 7% meant that demand was stabilizing as excess supplies in the market are being drawn down.

The ultra-large diamond market has slowed as well: Gem Diamonds, which operates the Letseng Mine in Lesotho, said the average price of diamonds recovered this year is down 23% to $1,417 per carat. Letseng’s production is small – about 110,000 carats yearly – but it routinely produces diamonds over 50 carats.

The U.S. remained the world’s largest market for diamond jewelry, accounting for $36 billion in sales; just over 47% of the world total. The diamond content in jewelry sold in the U.S. totaled $12.3 billion.

The report noted that female self-purchase is the fastest growing category of diamond jewelry worldwide, but that gifts from men to women still represent 52% of non-engagement ring sales.

The report also noted that, because De Beers changed how it evaluates the diamond content in jewelry, the company revised previous downward estimates of total diamond sales. 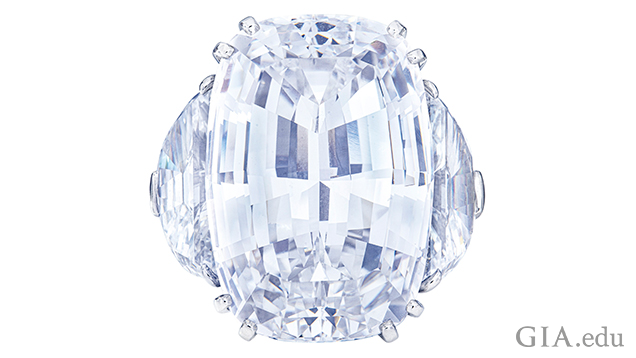 After a calm spring season, demand and prices at the extreme top end have again strengthened.

Christie's Nov. 12 Geneva auction was 93% sold by lot and 88% by value. The top lot of the sale was the GIA-graded Fancy Deep blue 7.03 ct diamond from London jeweler Moussaieff, which drew a top bid of $11.6 million ($1.65 million per carat), within the pre-sale estimate.

Other large gems that sold were:

Interestingly, all of the buyers chose to remain anonymous, which is unusual for large gems.

The following day, Sotheby’s Geneva auction house sold 80% of the lots offered. The top lot was a Cartier bracelet containing a 47.07 ct Burmese cabochon sapphire, accompanied by two pear shaped diamonds of 9.27 and 8.6 cts for $6.1 million, doubling its pre-sale estimate. The bracelet was made in 1927 and sold to an “Asian female collector,” according to the auction house.

Another buyer paid $3.4 million for a 6.03 ct GIA-graded Fancy Intense purple pink diamond ($563,847 per carat) mounted into a pendant, while a 14.97 ct Kashmir sapphire mounted into a diamond necklace sold for $1.4 million. 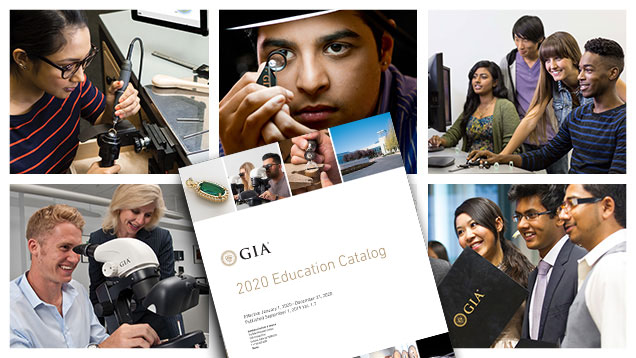 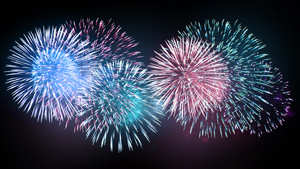 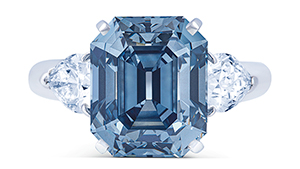